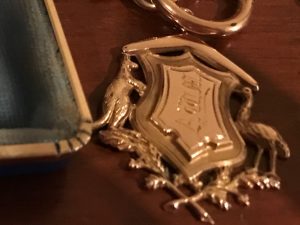 The medallion my Great Uncle Albert Marlow received as he departed for the Western Front has been stolen from my care. All five of the Marlow brothers were presented with a similar medallion from the people of their home town of Mologa, Victoria. Albert’s was lost from the family for many years. It is a mystery to the family as to how or why. Three years ago, by chance, I found it for sale in a second-hand shop in Brisbane. With the help of my parents, and despite an inflated price, we brought Albert’s medallion home to the family. This year marks the centenary of his death on the Western Front at the age of nineteen. Albert is buried in Belgium along with his brother George. Their big brother Charlie is buried in France. Somewhere, deep in my heart, recovering the medallion felt like bringing Albert home.

Our home in Peregian Springs was broken into while my husband and I were at work. Items of significant and intrinsic value were taken from us.  Most are replaceable. Then there are those precious things that no amount of insurance can ever, ever replace. Albert’s medallion is one of those.

If there is any chance of bringing Albert home again, it may rest with goodwill. If there is just one thing that I can have returned it is this, one of the most precious items our family own.  To the people who stole it, you know where we live. With all my heart, I ask for you to dig deep and find the courage and way to safely return it to us. It is easy to identify by the picture, it distinctly bears the Australian emblems of an emu and kangaroo in rose gold with the initials AWM on the shield. It is inscribed on the back with words like this – Presented to Albert Marlow from his Mologa Friends. To my Facebook friends, I cannot tell you how much I would appreciate your help by sharing this post. Just maybe it might reach the people responsible. Thank you.