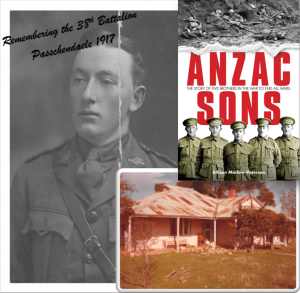 On October 4, the 1st, 2nd and 3rd Australian divisions and the New Zealand Division advanced on the German stronghold of Broodseinde Ridge. It was the next step in the advance toward the village of Passchendaele.  Allan and Percy Marlow went over the top with the 38th. Although the attack was described as “the most complete yet won”, the sacrifice had been great. The three Australian Divisions suffered 6500 casualties. Rain drenched the battlefield over the following week and the shelled ground turned to mud. Despite the conditions, the advance to Passchendaele continued. Allan and Percy clambered from the trenches; the objective of the 3rd Division was to take the village. No ground was captured. The Australians became bogged in the quagmire as the enemy troops fired down from the ridges. The Allied casualties were severe. Sixty-two percent of the men of the 38th Battalion who fought on that day were killed, wounded or missing. (Anzac Sons, 2015)

When my Grandpa, Allan, returned to Australia he built his own home using handmade bricks. He named it Passchendaele, scribed lovingly in stained glass above the front door.  It was his own memorial to his three brothers and his mates. May we never forget.