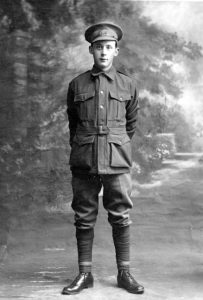 Nineteen-year-old Albert was positioned in support lines near Messines in Belgium and was killed in a heavy artillery bombardment. He is buried at Kandahar Farm Cemetery. His big brother Charlie (KIA 26.04.18) was with him at the time. Charlie wrote to his family at home:

I suppose long before this reaches you, you will have received the sad news of Albert being killed we came in to the trenches last Thursday and I believe are to go out on Friday next, and today between 1.45 pm and 2.25 the Germans were shelling us it was not in the front line but what is called supports. Albert was on gas guard near our company office I was about 5 chains away from him at the time in my dugout Albert and two officers and two sergeants were taking shelter behind a big dugout when a shell came over and killed the lot of them instantly, a sergeant came and told me Albert was gone and I went to him as quick as I could but he was dead and they had him on a stretcher. Joe Reed helped to carry him out, he was killed instantly as I said before and knew nothing. I know it will be a hard blow to you as it is to me, Allan went away this morning to a military school at about 8 oclock and will be there for about 12 days. Percy had a lump come up on his jaw like mumps and the doctor sent him to the hospital about 2 days ago, I have just wrote and told them I expect Percy back next week I have wrote to them all in England and wrote to Geordie, poor Albert’s watch was broken he had his coat off at the time there was a letter in it addressed to you and one to Myrtle Stone I am sending them on there is also a card for mother I got all his things and his money  … I cannot realise that he is gone but we will feel it, and will miss him very much, it is hard luck to be killed so far back from the front line which is about 2 1/2 miles away from here and only his second time under fire I know it is doubly hard on you so far away and to us here it is a hard blow under the circumstances I do not know where they will be buried but I think it will be near here, up to the present they have not buried them but I think it will be this evening they take great care of every man’s grave and place a nice cross over it with the name and number and battalion etc. it is near where we made the push I cannot tell you the name of the place or country but I think you will know. … I can guess how you will all feel at home and I can tell you we all share in your grief of our sad and sudden loss and I trust the rest of us will be spared to come home once again, you will be comforted to know that he died without pain and had no fear of shells or bullets, he died doing his duty to his country. I will say goodbye for this time there is nothing that I can say I know, that would relieve you of the awful blow, but let us hope that the rest of us will soon be home again, so goodbye with love to you all

I will remain your loving son and brother Charlie E Marlow