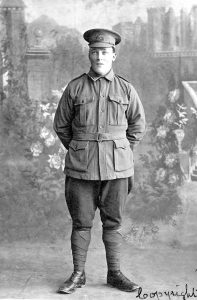 Today, 21 September, marks one hundred years since George Marlow lost his life on the Western Front. He was wounded in the opening hours of the Battle of Menin Road on 20 September. George is buried at Lijssenthoek Military Cemetery, just south-west of Poperinghe, Belgium, where he was taken the day he was wounded. As the crow flies, he is no further than 15 kilometres from the final resting place of his youngest brother, Albert.

George’s brothers of the 38th Battalion – Charlie, Allan and Percy, did not receive word of their brother’s death until November, well after experiencing and surviving the devastating Battle of Passchendaele. Charlie, who later lost his life on 26 April, 1918, wrote an anguished letter to his family:

Again, you will have received the awful sad news that our dear Geordie is gone, it breaks my heart beyond words to think that I shall never see him again, I wrote and told you that when we were camped near his unit I went one afternoon on my own to try and find him. I walked miles and miles but would not give up till I found him at last I found his unit and they told me that he was wounded and that it was not serious since then I had not received any word from him so I wrote to England and to his officer and today I received the very sad news from the Captain of his unit that poor Geordie died of wounds at one of the Casualty Clearing Stations … he did not state when Geordie died but it must have been soon after he was wounded, generally speaking in one of those stunts if a wounded man got out to the dressing station he will get on alright but the stomach is a very bad place, his mates dressed his wound and said that he was in good spirits and was not in any pain, his wound was not deep as the equipment saved him, they carried him behind a big concrete dugout and got a stretcher bearer, who brought him out, and the unit received word that he had passed through the Casualty Clearing Station, and they thought he would be alright when I heard that I was confident that he would be alright as he was not a fellow who would go down in spirits. Geordie was reserved for the stunt he and his team but at the last minute one of the other Corporals took ill and Geordie had to go, his mates told me what a fine fellow he was, and that when he was told that he was not to go over he was quite disappointed he wanted to go, he was not a bit frightened. I could see from what he told me when I met him that he was not frightened, I can honestly tell you that I don’t believe there is another Australian living who has done as much for his country than Geordie, he has done many things worthy of a Military Medal and a Distinguished Conduct Medal. I will find out all I can, how he died where he is buried and everything about his last moments, the Captain is writing again to me as he as in the line when he wrote he is going to write and tell me where he is buried, I will write to the Chaplain and nurses of the hospital and find out all I can, I am very glad that we met over here he was just the same as always, he had that same smile on his face and looked splendid, I was out with him two days, I worked a point one day to see him, I broke my teeth and said I wanted them mended so parade for the Dentist at the same time I made arrangements to meet me in a certain town I shouted him a splendid tea, it seemed like home to be with him, I also gave him a £1 note that was poor Albert’s … I do feel it terribly he was an ideal brother nothing was any trouble to him, I was to meet him another day, but we shifted here, little did I think that was the last time that I should ever see him again poor fellow he died doing his bit for his country and whatever he done it was done as a soldier should do it. The Captain said he was one of the best N.C.O. that he ever had… I do not know how you will ever stand it, but I feel broken up to think that we have lost such fine fellows as Albert and Geordie, we are out of the line for how long I do not know, but please God we will be spared to return to you as we have done our share in this war, however I trust that their lives will not have been given in vain, but it is hard to part with them. I am a Corporal now, I will take care of myself for your sake, and trust that the day is not far distant when we will be home again, I will write a line to Pearl and send it with this, I share with you the loss of our dear Geordie and deeply mourn his loss, I know you will feel it I can tell you I feel it very much, I will say goodbye for the present with love and sympathy to you all.

I will write again shortly.

Second Lieutenant William Seabrook of the 17th Battalion who also died of wounds in the Menin Road advance on 21 September. He lies nearby to George. Both William’s brothers had been killed at Menin Road on 20 September. They have no known grave. The appalling cost of war is measured in tragedy on this scale — three sons lost to their family in the space of one day. Major Frederick Tubb of the 7th Battalion, a Gallipoli VC winner, is also buried here, having been killed on 20 September. Like George, he was killed by gunfire, but not before his company had achieved their objectives, overpowering nine pillboxes to reach the southern side of Polygon Wood.

May we never forget their courage and sacrifice