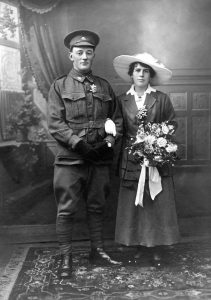 In the early hours of 26 April, 1918, Sergeant Charlie Marlow set off to collect breakfast and deliver it to his platoon, positioned in the forward trenches at Buire-sur-l’Ancre.  It had been a long night. Enemy artillery fire had fallen heavily along the railway line. After four days in the front line, the exhausted men of the 38th looked forward to their relief later that day. On his way Charlie spoke to his brother, Lieutenant Allan Marlow at company headquarters. He paused to chat with mates along the lines.

Between 5.30 am and 6.00 am, laden with breakfast for his men, Charlie picked his way through the network of trenches as he returned to the front line. He had just been warned to keep his head down, as a sniper was active in the area. The warning came too late.

Charlie had lost his life at the age of 26. He was never to hold his baby daughter and his wife was now just another young widow. Sarah and Charles Marlow had lost three sons to the relentless carnage of the Western Front. They did not have the opportunity to say goodbye, nor to grieve at a graveside. Jim, Allan and Percy had lost three brothers in nine months.

With a palpable sorrow which he struggles to express, Allan wrote to his brother Jim:

My Dear Jim, Well dear Jim it breaks my heart to write this letter. Our dear Charlie was killed yesterday morning at 5.30. The bullet killed him instantly and he never spoke a word. I had just left him and gone down the trench to see the other lads when I was called back. Oh Jim it is awful. He is buried in a nice cemetery a good way behind the line I attended the burial with a lot more. It is awful to think that poor old Charlie has gone now. Oh I do hope he is the last. What awful lot of trouble we have had in a few months. Jim I do hope you all bear it the best you can. It has broke me up properly. I am out of the line. It is awful losing 3 good lads like this but Jim you know someone must go. It is impossible for it to go on without somebody going. I am doing my best to get Percy home. Everybody tell me that it is a cert for one to go home so he can go. I am writing to heads in London. Jack Angus, MLA Angus’ son is doing a lot for me too.[i] I do hope it works. Jim I will tell you in a later letter where our dear Charlie is buried. I am having a nice cross put up over him like we had put over Geordie & Albert. Dear Jim he was buried with full military honors. Tell dear mum & dad to try and bear up as well as they can. As it worries me I was never so broken up in all my life but Jim you know we have to keep going. Well dear old boy I can’t write anymore so will close with best love to all.